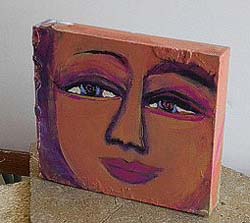 Eric, truly an outsider artist, is untrained in art but has completed more than one college degree. Fortunately, he knew early in life that art was his true calling and he has developed and grown in style and complexity over the years.

The following is an excerpt from an article by Elizabeth Lenhard which appeared in Atlanta Magazine in June of 1999:
"Legge, 28, peers through paint-flecked, tortoise-shell specs. His smile is nervous and constant. His haircut is as choppy, his cheekbones are as hollow and his jeans’ legs are as voluminous as any Greenwich Village urchin's but his accent is South Georgia sweet. He was influenced by his father, Joe Legge, who made a living as a hairdresser but considered his wood carvings his life's work. Eric Legge, student hobbyist would become Eric Legge sought-after folk-art figure. After he graduated, Legge peddled his paintings on Atlanta street corners. He made a day trip to three galleries and landed niches in two of them that day. The same summer, his work was hung in the Olympics' temple of funk, the House of Blues."