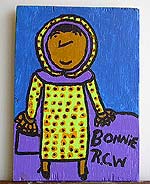 12" x 17"
acrylic on wood
"Bonnie" is one of Ruby's signature pieces
she never leaves home without being perfectly dressed !

I Need A Drink 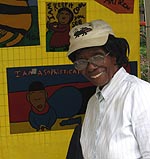 Ruby Williams first began painting simple hand lettered signs simply to advertise her roadside fresh produce stand, but when her signs attracted the attention of her first patrons, folk artist Rodney Hardee and Bud Lee, cofounder of the American Museum of Serious, Naïve and Children’s Art in Plant City, Florida, a new folk artist was discovered. Encouraged by Hardee and Lee she began to enliven the simple paintings of a strawberry or bean with animals and people such as Bonnie Bon Bonnie. Her down home wisdom also began to find its way into her works. Some of her savvy sayings are religious but most are moral lessons or are based on memories drawn from her life, some with a little “attitude” thrown in for good measure – “Hey, This is My Life". Ruby’s signs are on display at many House of Blues venues throughout the U.S. and are widely shown and collected.