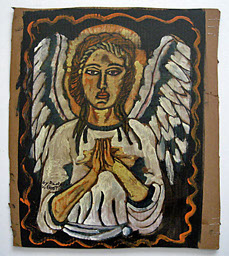 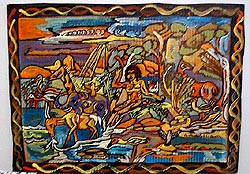 Adam in the Garden 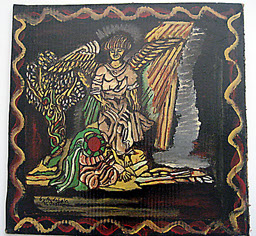 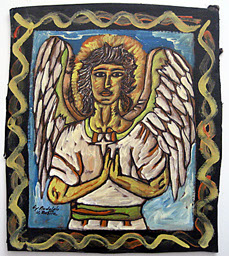 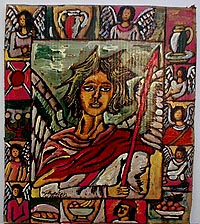 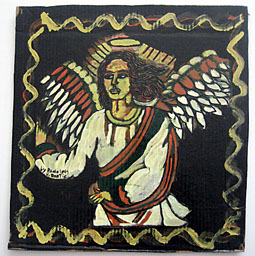 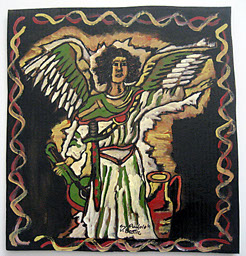 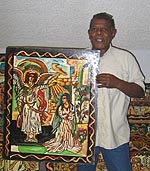 Rudolph Valentino Bostic, a classically inspired, self-taught visionary folk art painter was born on August 16, 1944 in Savannah, Georgia where he lives and works today. As a child having few toys, Rudolph Bostic began drawing cowboys with crayon on notebook paper which he cut out for his cousins to play with. At 17 he began drawing Christian pictures to display at his church based on pictures in a Bible. Despite being discouraged from pursuing art by many others who believed “there was nothing to being an artist”, he began to study the old masters’ technique of chiaroscuro or the use of light and shade to add depth to his work. His energetic biblical and mythical folk art paintings with pop culture influences are executed using simple house paint on cardboard which he prefers for its smooth surface as he listens to his television and radio. Drawing inspiration from his own study of Michelangelo and other old masters, Rudolph Bostic has developed a brilliant, magical style, securing a solid reputation as a prolific and talented folk artist.

The Mennello Museum of American Folk Art in Orlando, Florida.